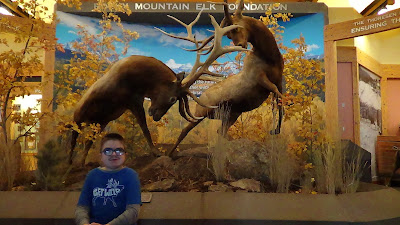 Montana RMEF partnered with the Outdoor Dream Froundation in sponsoring a special needs youth hunt.  Daniel is a 13-year old from Michigan who has Hurler Syndrome.  People with Hurler syndrome do not make an enzyme called lysosomal alpha-L-iduronidase. This enzyme helps break down long chains of sugar molecules called glycosaminoglycans. These molecules are found throughout the body, often in mucus and in fluid around the joints.  Without the enzyme, glycosaminoglycans build up and damage organs, including the heart.

Daniel flew in to Missoula with his father Mike on November 4, 2017.  The Five Valleys Chapter of RMEF gave them a tour of the RMEF Visitor Center, and then explored downtown Missoula.  Then it was time to settle down for the night at the Hilton Garden Inn which graciously donated their room.

On November 5th, there was a quick stop to pick up their rental car which was donated by Dollar Rent A Car followed by getting some groceries for the week.  Finally they were on their way to the CB Ranch in the southern Bitterroot River valley near Darby.  They arrived with enough time left in the day for an afternoon hunt, so off they went with a ranch representative, videographer and RMEF volunteer.  Elk sightings were numerous, and there was a few close opportunities, but the stars did not quite align.  That night, and the next few nights, they kicked up their feet and eventually hit their pillows at The Darby Bed and Breakfast which provided their services at a reduced rate in support of the hunt.

On November 6th, it was an early start for another attempt at those elk.  Sightings were again numerous, and again the stars did not quite line up.  That is until the last part of the day when everything came together and Daniel harvested a beautiful young bull.  High-fives and photos followed, and then it was time to get the elk to the ranch where it was hung from a beam in the barn. 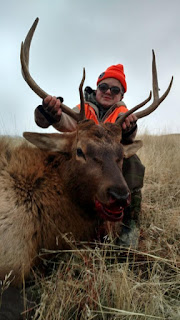 Daniel was not done yet, and on the morning of November 7th, they were back at it again.  It didn't take long for him to harvest a nice whitetail buck that was starting to gear up for the rut.  Two nice animals harvested in less than 24 hours.  Way to go Daniel! 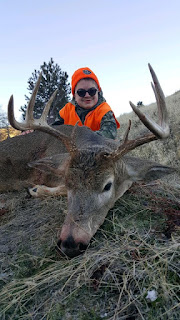 A few more days doing some relaxing, fishing, hanging out at the ranch and in general just enjoying the beautiful state of Montana.  Then one last night in the hotel at the Stone Creek Lodge in Missoula, and early morning flight back to Michigan where Daniel will recount his  stories and relive the memories again and again.   And of course, to eat some mighty fine meat as well.

Montana RMEF wants to thank the CB Ranch for sponsoring this wonderful opportunity for a youth with special needs to have an awesome experience.  We also want to thank Outdoor Dream for partnering with us in putting on this hunt.  We also wish to thank the Hilton Garden Inn, Stone Creek Lodge and Dollar Rent A Car for donating their services and for The Darby Bed and Breakfast for providing their services at a reduced rate.
at 8:54 AM