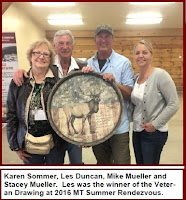 The Montana Rendezvous had the fortunate situation of having World War II Veteran, Les Duncan of Missoula, in attend-ance. According to Veteran Administration statistics, only about 1 in 20 veterans of the 16 million who served in World War II are still with us. So it is indeed a fortunate situation to have a WWII veter-an attend Rendezvous or for that matter any RMEF event.


On March 8, 1943, at the age of 17, Les joined the Navy in Fargo, North Dakota. Les reported to his training at Farragut, Ida-ho at the U.S. Navy Training base boot camp in 1943. After train-ing he boarded a train to San Francisco and then from San Fran-cisco on the S.S. Walter Colton Merchant Marine Ship to Noumea, New Caledonia. He served on the Battleships U.S.S. Massachusetts and
later on the U.S.S. Washington in the 3rd and 5th Fleet as a seaman, fireman and electrician. Les was scheduled to be dis-charged when his orders changed to “essential” to transport troops from South Hampton, England back to the United States. This was about three months in duration. He was honorably discharged at the Great Lakes in Illinois in April 1946. He served in the Asiatic-Pacific Campaign and was awarded American Area Campaign Medal – Philippine Liberation Ribbon (2 stars) and Asiatic-Pacific Area Campaign Medal (7 stars)

Les is not the type to tout his service to our country. It was his Navy tattoo that gave him away. Mike Mueller, RMEF Lands Program Manager for Montana & North Dakota happened to notice Les's Navy tattoo on his forearm. Mike's father also served with the U.S Navy in World War II, and Mike was proudly wearing his father's Navy ring at Rendezvous.

On Saturday night at the Rendezvous, all veterans were asked to stand and be recognized, and a round of applause followed. Mike Mueller stood up and gave a nod to Les's World War II service. Without the service of these veterans we would not have the freedoms we have today to spend those wonderful days out in "Elk Country". All veterans were then given a ticket for a chance to win a faux whiskey barrel end which had an elk and American flag painted on the face along with RMEF's mission statement - "ensuring the future of elk, other wildlife, their habi-tat, and our hunting heritage". When the winning ticket was drawn, it was Les who was the lucky winner, and he has since proudly mounted it on the wall of his den.

RMEF views itself as a family. A family of men and women, young and old, hunters and non-hunters, different cultures, beliefs and so forth, with a common passion for elk and other wildlife. So how did Les become a member of the RMEF family? I'm the Chairperson of the Five Valleys Chapter. A number of years ago my mother moved out to Montana to be closer to her only grandchild. I started calling upon my Mom to help me here and there with RMEF tasks. Picking up supplies, dropping off a Sponsor Hat, picking up donations, helping at the ban-quet, etc. She happened to run into Les now and then and found out he made birdhouses and other woodcrafts. She took one of their chance meetings as an opportunity to ask if he would like to donate a birdhouse to the Five Valleys banquet. Les said yes. Apparently, "would you like to donate a birdhouse" is romantic-speak for the octoge-narian crowd, as soon after they became an item. That was Les's first mistake. Soon my Mom was roping Les into helping with RMEF chores as well. That was Les's second mistake. But too late now to escape. So Les is now helping out at Appreciation Night, the Five Valleys ban-quet, and other chores and errands, and has now been to his third Ren-dezvous. And that is the story of how Les is now part of the RMEF fam-ily and helping to ensure the future of elk, other wildlife, their habitat, and our hunting heritage.

Email ThisBlogThis!Share to TwitterShare to FacebookShare to Pinterest
Labels: Rendezvous