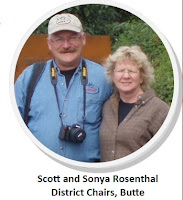 Scott grew up in New Mexico where he heard rumors of elk living in the nearby Jemez Mountains, and had yet to see one there in the wild before moving to Butte to attend Montana Tech. Sonya and Scott met while still at the university and working summer jobs of the Stillwater PGM Exploration project. Scott was impressed that Sonya not only had hunted elk but had been with her father to harvest an elk. Scott began elk hunting once out of college and working back in New Mexico.

Scott (243L) and Sonya (376L) Rosenthal were first introduced to RMEF at a
Big Game Banquet in Elko about 1988, when they were working in Nevada. They enjoyed the banquet and the overall cause for elk and other wildlife that they became life members shortly after. Since then, their support of RMEF has been divided between remote membership due to working overseas and, upon returning to the USA, active with the Castle Rock (Colorado) Chapter 2003-2012 and the Southwest Montana chapter in 2013. They both held their unique positions in Castle Rock (Chapter Chair, Chapter Co-Chairs, Game Manager, Treasurer, and Merchandise Chairs). Scott was Eastern Colorado State Chair from 2011 until moving to Montana in 2013 working with Regional Director Allen Kerby.
Since moving to Butte in 2013, Sonya & Scott are active in the Southwest Montana (Butte) Chapter of the RMEF. Sonya is currently Merchandise Chair and Scott is Finance Chair. Sonya & Scott are Habitat Council Members and Scott has been a Sponsor at each banquet since 2002. Scott supported the Wounded Warriors Hunt in 2015 and is keen to ensure the program is supported going forward. This year these two celebrate 30 years of wedded bliss. Sonya is currently working as a part-time consultant with CDM Smith (Helena), and an Adjunct Instructor at Montana Tech for Civil Engineering, she’s a Board Member of the World Museum of Mining, Project Manager for the Spirit of Columbia Gardens Carousel, and Construction Manager for Engineers Without Borders-Montana Tech (the latter three roles are voluntary). Scott is Department Head and Assistant Professor of Mining Engineering at Montana Tech. You can find Scott out looking for gold and working with gems and minerals when he’s not looking for elk. These two enjoy working with RMEF staff, volunteers, and potential members to ensure the RMEF mission is shared, practiced and enjoyed.
They are looking forward to representing you and the elk!